Privilege, Poison, and the Trial that Ushered in the Twentieth Century 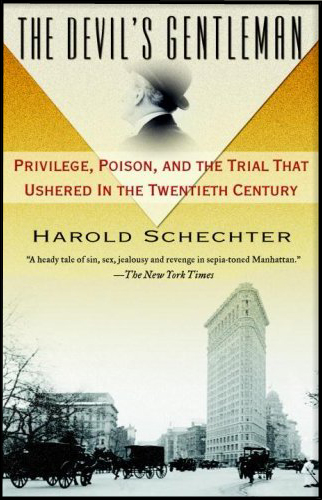 From renowned true-crime historian Harold Schechter comes the riveting exploration of a notorious New York City murder in the 1890s, the fascinating forensic science of an earlier time, and the grisly court case that became a tabloid spectacle.

The wayward son of a revered Civil War general, Roland Molineux enjoyed good looks, status, and fortune–hardly the qualities of a prime suspect in a series of shocking, merciless cyanide killings. Molineux’s subsequent indictment for murder led to two explosive trials and a sex-infused scandal that shocked the nation. Bringing to life Manhattan’s Gilded Age, Schechter captures all the colors of the tumultuous legal proceedings, gathering his own evidence and tackling subjects no one dared address at the time–all in hopes of answering a tantalizing question: What powerfully dark motives could drive the wealthy scion of an eminent New York family to murder?

Review in The New York Times